When Italia 90 was on, We used to come home from Madressah and yes Herbly I was in Std 6. I watched a left back for the Azurri called Poalo Maldini. 17 years later, f#$ken 17 years later I watch the man in the same lounge on a LG with a remote instead of a Telefuncken with dials, lift THE UEFA CHAMPIONS LEAGUE trophy for the umpteenth time. Malt was there during the era of Capello with greats such as Massaro, Gullit,Rijkard, Van Basten and another Legend Franco Baresi. He formed the Rock of the Azurri & Milan defence for so many years. Nesta & Cannavaro emulated him and forwards feared to play against him. the timing of his tackles were astute and precise. 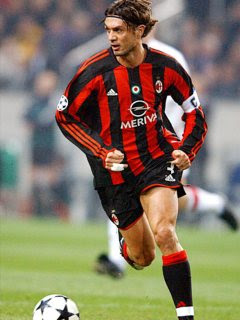 And What tackles he made in his time. He is still doing it at 38.Playing on the most hallowed of turfs at his age and still playing like his 20. For Poalo all that eluded him in his illustrious career is The Fifa World Cup. Even though Grosso,Zambrotta & Materazzi had a great tournament I am 100% that Poalo Maldini would have done an equal showing. I have inserted a video that shows this mans legendry status and some great tackles. Thats the beauty of being a great defender and Italian Defenders throw their bodies on the Line time after time and as the phrase goes “DEFEND WITH LIFE AND HEART,BLOOD AND GUTS”. So as a tribute to The Blog Poalo it is fitting that Poalo Maldini is indeed a LEGEND THAT SHOOK THE BLOG